Must Have the Precious 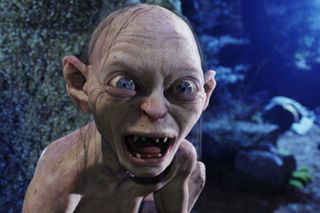 How did Smeagol become Gollum?

For those of you who don't know, Gollum is a major character in Lord of the Rings. As a young adult named Smeagol, his relative finds the One Ring, an artifact of great power that can corrupt those who wield it. Smeagol demands the Ring from his relative, then kills him to take it. Initially he uses the power of the ring for personal benefit, thieving and antagonizing his family until eventually he is expelled from his community, spending most of the rest of his life in a dark cave, miserable but he had his "Precious". He becomes "Gollum", and Smeagol is forgotten. Eventually he loses "Precious", and starts the events leading to "The Lord of the Rings".

Part of the story of The Lord of the Rings is how the quest for this object cost Smeagol everything, and turned him into a vile creature, despised by all who know him. He uses any tactic to get what he wants, be it pretending to be someone's friend while plotting to kill them, lying, stealing, and justifies any action, no matter how vile, in that the Ring is rightfully his and it is his "destiny" to have it.

A briefer summary: Other people create/find something of great value, Smeagol takes it by force, proclaims it as his, treats even the closest to him so badly he is shunned, justifies horrible behaviour upon this lie, and ultimately is responsible for the destruction of that great value that others created.

This, of course, has nothing to do with uBeam, so here's where I segue. Far in the past, before I became involved in uBeam, there were two co-founders, Meredith Perry and Nora Dweck. Few have heard of Nora, but she's an important part of the creation of uBeam. My information is not first hand, it comes from court documents and speaking to key players outside my role in the company, so take what you will from what I say here.

Perry and Dweck ended up in an ugly fight - one ugly enough to reach court. The complaint can be found here and here. For those who don't enjoy reading court documents, let me summarize it for you:

Dweck sued Perry for "breach of fiduciary duty, breach of contract, and fraud" following the initial founding of uBeam. They were both students at UPenn at the same time, and were roommates in 2010 and 2011. They both regularly swapped ideas for companies and inventions, and at one point Perry suggested 'wireless power using ultrasound' and the two brainstormed and collaborated to create 'uBeam'. Until May 2011, they publicly discussed the concept and presented themselves as equal partners in this endeavour.

In April 2011 they entered and won the "PennVention" competition with uBeam, which had required significant preparation not just on the technical side, but on the business side for marketing and sales as well. When they accepted this award, and several other prizes, they did so as partners and equals. Realising that they needed IP protection, Dweck engaged (and presumably paid for, since her family was quite wealthy) an IP attorney to prepare patent applications. Perry agreed with Dweck that the IP would be jointly owned, and that she would make sure the IP was transferred to a jointly owned company they would create. Dweck let Perry take care of that aspect while she spent her time getting a website, logo, and business cards done for them. Then came "All Things Digital".

"All Things D" is where it gets interesting. It's an invitation only conference on tech and business associated with the Wall Street Journal. You can get great access to potential funding and publicity there. Perry and Dweck presented a demo that wowed the non-technical audience, but proved nothing to anyone with any understanding of electrical engineering, and you can see a blow by blow account of that here. Still it was enough to garner more interest and apparently a uBeam product by the fall of 2011 (what year is it now?) and things took off from there. Reading them talking here, it's almost sad knowing what comes next.

The pair is trying to raise $3 million to get the product ready for release. “We’re in conversations with a few different companies,” Dweck said. “The future’s kind of bright.”

Now just days before this conference Perry had sent Dweck a company Operating Agreement, not a final one but "just to have something for D", and that "we'll do the real one later". Pressed for time, Dweck signed - and shockingly the document was an 80/20 split in Perry's favour. (Why did she sign you say? Well, she's 21 and doing cool stuff with a friend, why would she be concerned that her friend wouldn't do right by her?).

After All Things D, uBeam gets lots of publicity and people tell Perry that "it's a billion dollar company" and Dweck begins to be excluded from things. Suddenly, Dweck can't get company information, files, reports, and Perry is saying it's all hers. Not just the unfavorable 80/20 split, but 100/0. Perry threaten to dissolve uBeam if Dweck persisted in demanding information (the "shoot the hostage" tactic). It all descends from there, with Dweck as a company owner and officer demanding an investigation into Perry's wrongdoing, and the awesome response from Perry that she had investigated herself and found no wrongdoing.

And then the lawyers are involved, and a court case begins. Dweck sues Perry for 50% of the company. In the end it is settled out of court with Dweck rumoured to get 20% of the company, the title of co-founder, and a gag order to not talk publicly about the resolution.

There was no court finding for the public to see, no judgement as to who was right. But I can tell you this - having worked with Perry for years, I believe Dweck, and in my opinion she describes the Perry I unfortunately came to know very well.

A briefer summary of the court docs: Multiple people create/find something of possible great value, Perry proclaims the company as hers, and alienates someone once a friend to the point of going to court.

So back to the original question. How did Smeagol become Gollum?

In my opinion Smeagol never existed, he was always Gollum, just with a thin veneer of civility. The Precious just showed him for who he really was. 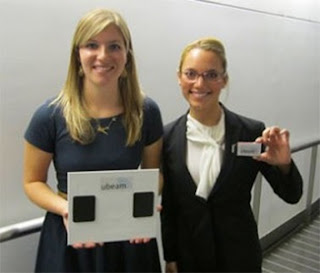 Perry (left) and Dweck (right) from this article. 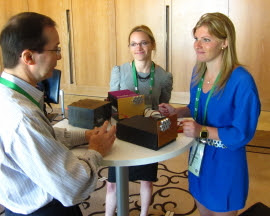 And another interesting 2011 article
Posted by StartupPR at 4:29 PM