President Trump's first budget proposal is calling for dramatic cuts to many agencies, including the National Institutes of Health (NIH), one of the leading funders of research in the USA - the NIH would face around a $6 billion cut (~20%). The NIH is the largest funder of medical research in the world, and back much of the medical research in universities and labs around the country. Many of the medications and treatments used today had their start in NIH grants, and key research leads to entire industries, such as what arose from the Human Genome Project. The NIH have a nice list of the value they add to society, the economy, and our lives, here.

In large part it's the Research and Development funding from the US federal government that makes the USA the global leader in technology. Studies demonstrate that funding at the R&D level result in up to $8.38 of economic activity 8 years later for each $1 invested - infrastructure debt, that supposedly we'll find $1 trillion for under the mattress, would be expected to show around $1.92 return per dollar within a few years, and about $3.21 over 20 years.

By a factor of 3 or more, spending on basic R&D returns huge economic benefits to the country compared to infrastructure, and it's simply short sighted to cut. (Of course a functional infrastructure is also needed, hard to drive to your research lab without roads! But it's not a binary either/or choice - and 'infrastructure' like a pointless/counterproductive border wall will cost more than is saved with the NIH cuts) This has been something that every administration for over 40 years has recognised, and can be seen in data collected by the American Association for the Advancement of Science. 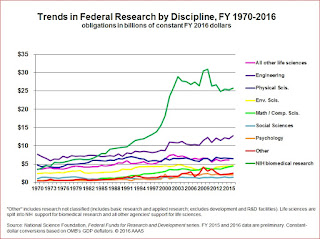 The Clinton years saw a massive rise in NIH spending, and we're reaping the benefit of that investment now. Even in the Bush through Obama years, while NIH remained flat (barring the ARRA boost), other agencies saw an increase. The cuts in the Trump budget are unprecedented in the last half century.

The smartest students from around the world come to US universities to study, both as undergraduates and researchers - and the US gains the best and the brightest of the rest of the world, and without paying the cost of raising those people. It's a huge net positive for the country, especially when those people stay, become citizens, and have children, as people tend to do when they are welcomed and given a chance to contribute. Those children of immigrants themselves are typically far more likely to contribute to the advancement of the country in science. Consider this statement from a Forbes article on immigrants:

A new study from the National Foundation for American Policy found a remarkable 83% (33 of 40) of the finalists of the 2016 Intel Science Talent Search were the children of immigrants. ... In fact, 75% – 30 out of 40 – of the finalists had parents who worked in America on H-1B visas and later became green card holders and U.S. citizens. That compares to seven children who had both parents born in the United States.

So this science spending results in economic returns of at least a factor of 8 within 8 years, and encourages smart, law abiding, company founding, job creating immigrants to come to the USA, have children who are then the most driven of their generation, will improve society and the economy decades from now, and make sure we can all retire well in a booming economy. Why would you destroy that?

Well allow me to answer that. It could be you are:

A) Ridiculously stupid and short sighted, utterly unaware, and uncaring, of the consequences
B) An idealogical zealot intent on destroying goverment at any cost
C) Racist and want to discourage immigration
D) Intent on damaging the tech industry out of spite
E) An agent of a foreign power intent on destroying the long term effectiveness of your enemy
F) All of the above

Given this current administration, it's 'F', with each person in it more of one of those than the other. Bannon and Miller are simply white supremacists and want to end all immigration, legal or not, to the country - they've literally said "legal immigration is the real problem". The tech industry has been vocal in its opposition to the Executive Order that has now been rejected by the courts twice, and by cutting science funding it harms them, despite the negative consequences to the country - a price the likes of Bannon would pay given he doesn't like the race of many Silicon Valley company CEOs. Price, as head of Health and Human Services, is a member of a group that is anti-vaccine - which is one of the greatest success stories in saving lives and health in the 20th Century. The President shrugged his shoulders last week claiming "Nobody knew that healthcare could be so complicated", which even for Donald Trump manages to rank as one of the dumbest things he's ever said (despite the pretty stiff competition).

And then there's the 'agent of a foreign power' - Vladimir Putin must be giving himself a hernia from laughing so much at the self inflicted damage the USA (and the UK with Brexit) are inflicting on themselves. There's no proof it's a direct agent doing this, but "useful idiots" helped into positions of power are achieving what Russia and other unfriendly nations can only dream of.

While the administration has to get this budget through Congress (Republican controlled and so far they seem unwilling to stand up to even the most ridiculous of his behaviours, even when he literally fabricates a felony perpetrated by his predecessor.) but the President has lost on pretty much everything he's pushed as signature policies over the last 2 months (still waiting to be "so sick of winning"). Hopefully the worst of this will be stopped, but will only happen if Congress sees their own hides, or money to their constituencies, threatened. Sadly, 'upset scientists' is not a key demographic - at least not yet - and regardless of what happens here, it's clear that the President and his administration are intent on gutting one of the great American success stories of the last half century.

Science is global, it doesn't care about national boundaries, and published research is by definition known to all, not restricted to a few. Scientists want to educate children to be knowledgeable, thoughtful, inquisitive, and also work with the best and the brightest wherever they are, whatever their gender, religion, race, or country of origin. It's what's raised our life expectancy, our quality of life, our productivity, and our opportunities, and been part of what has kept the USA as a global leader. And all these things are antithetical to a group of people mired in the past, who are wanting to divide us based on religion and race, and destroy one of the most critical things that Made America Great.

What can we do? It's important that those who will vote on this budget know these cuts are counter productive. Call your House and Senate representatives, let them know this can't be allowed to pass in the budget. Make no mistake, there's no sense or logic in these cuts, and the country will be damaged because of them - and for the people proposing this, that's seemingly the intent.
Posted by StartupPR at 1:54 AM 13 comments:

Another One Bites the Dust

Hot on the heels of uBeam's apparent demo of a phone screen turning on, it seems there's been a change at the company. Their COO appears to have departed and become the EVP of Operations at Fitbit. Stunning that a C-level exec would leave when the company is on the verge of greatness, especially an Operations person who is not so much R&D but very much product delivery, exactly what you need when looking to transition to a new phase of growth. Here is one of the announcements of his joining the company from 18 months ago, along with then CFO Monica Hushen (who left the company last year).

Devine was one of the three executives, along with Taffler and Chandler, mentioned by name by the lead investor in his defence of uBeam in May last year as being key in the company's progress. All three have since left the company.

Per LinkedIn, this leaves Larry Pendergrass as the sole executive with significant industry experience. He joined last September, announced here.
Posted by StartupPR at 12:43 AM 3 comments: