uBeam started 2019 by giving some private demonstrations of their wireless power transfer system at CES, which according to their PR material "using proprietary transmitters and receivers, uBeam is able to deliver the necessary power to charge a range of devices from portable electronics to IoT sensors at various distances" which manages to set no expectations or give any real indication of what it can do, like any good PR should (unless it truly can do something useful!).

The New CEO
I had expected it to be fairly bland and that there be nothing to report on, however there were a couple of things worth reporting on. First up, they announced that there is a new CEO, replacing the CFO/HR Director that had been a stand-in since Perry's departure in September (or maybe July). From the announcement:

uBeam Inc., the pioneer of ultrasonic power-at-a-distance wireless charging, announced today the appointment of Simon McElrea as Chief Executive Officer. “I am delighted to lead uBeam and its many talented employees at this pivotal time in the wireless charging industry,” stated McElrea. “The proliferation of IoT networks that require safe, reliable, Always-On connectivity and power, from the Smart Home to the much larger commercial, industrial, agricultural and renewable energy markets, is right in our sweet-spot.”

“Over the past 18 months, our team of 30 engineers has been singularly focused on the miniaturization of the technology, to enable us in 2019 to provide reference design kits to our manufacturing partners and customers so that they can integrate it into their diverse range of products,” said McElrea. “By developing the complete turn-key solution, from industry-leading transducers, to custom ASICs, control electronics, hardware and software, we have created an end-to-end solution, as well as the associated IP, which currently totals over 100 patents and applications. We are excited to be able to showcase this work at CES during the coming week.”

So first of all, they've finally got someone in the CEO role who can put together a sane, sensible, competent sounding statement. Now the accuracy of some of these points is questionable - the company has been going since 2011, but seriously funded now for over 4 years, not 18 months. In fact, 18 months ago in the USA Today article, member of their Technical Advisory board, Matt O'Donnell, was saying:

“When Meredith called me in 2015, I was curious and skeptical as hell, because you just hadn’t seen efficient airborne transducers, but holy moly, the leaps they’ve made in the past 18 months have been impressive.”

It's that magical 18 months again - nicely chosen in the past to be just out of firm memory, and for the future far enough away everyone has forgotten by the time you get there.

Company pictures and LinkedIn do not seem to support 30 engineers, more like the low 20's and not all of them will be engineers. 100 patents and applications seems high too, unless a very large number have been submitted in the last year and are still not visible to the public, or they're double counting international applications. Press - next time you speak to the CEO, maybe ask for the patent list and an actual headcount?

And reference design kits in the next 12 months? Those will be interesting to see.

So what's the new CEO's background? He's actually a well qualified person for the role and IMO finally sees someone competent in the big chair at uBeam.

McElrea joins uBeam having served as CEO of Semblant Ltd. since 2015, a UK and Silicon Valley based B2B nanotechnology company which was acquired in Q4 2018 by HZO, a global leader in electronic material technologies. Prior to Semblant, McElrea was Vice President of IP, Licensing and Marketing at Energous Corporation, a San Jose based wireless-charging company that completed its IPO in 2014 and was awarded “Best of CES” in 2015. McElrea was responsible for the marketing, patenting and licensing strategy, as well as initiating FCC engagement and the formation of the “Uncoupled” wireless power standards committee within the AirFuel Alliance.

I just about fell off my chair laughing when I read that - long time readers of my blog will know I've been covering Energous extensively, as another at-distance wireless power company that many describe as a straight up scam. I started covering them back in 2016 in-part because I could go into details about the RF power delivery method Energous use, pointing out the basics of physics that limit them, many or all of which also applied to uBeam, without risking breaking my NDA with uBeam. I've said before I think the genius of Energous has been in repeatedly raising money from markets despite IMO having little to nothing, not in any of their technical work, and much of that came from IP, licensing, and marketing.

If uBeam are in the position that they have as little technical capability as Energous to charge a phone safely, then expect them to follow the Energous path for PR, product announcements for 18 months out that never happen, mysterious deals with Tier One vendors that can't be divulged, and similar. They've already stepped back from the multi-meter, multi-watt, multi-device claims and are covering "IoT" only now - what next? While uBeam can't tap the IPO market the way Energous smartly did early on, there are still fools out there who might think this is a worthwhile purchase. Will we see uBeam sold "for an undisclosed amount" in the next year? I expect that will be a high priority for the new CEO - put a pretty bow on uBeam and get it sold. Or should I say lipstick on a pig?

The Demo
That was going to be the full extent of this post, until earlier today the EEVBlog posted a very interesting picture of uBeam's CES 2019 demo kit. 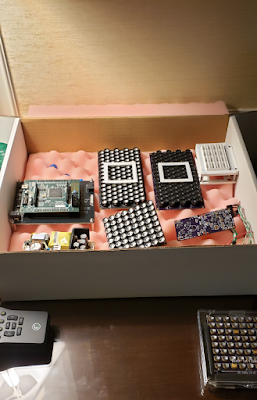 Now I know as much as you do about this, but if this is the whole demo, it's failing to meet even the low bar I had set for them. If this is it, what you see in that photograph is the result of nearly $40m of investment to date, and around 5 years of work. The three boards in the box with the circular components in grids are the transmitter or receiver transducer boards, and it looks very much like they are still using standard Murata transducers - basically the devices that work as car parking sensors in most vehicles. Why are some white and some black, I'm not sure, they may be the send and receive versions that Murata have, or simply someone has removed the thin grill from the front face on some. The two rectangular boards seem to be about 14 by 8 cm in size, so roughly the same size as an iPhone X.

Dave Jones on EEV Blog points out in the bottom left is a rather unsafe looking power supply, maybe around 100W or so, with the energy harvesting boards in the bottom right that might get mW out. (Update: The bottom right board is a "Burst Circuit PCB" and you can order it from here (link now inactive). Thanks EEVBlog.) If that's the case, it would point to efficiency being in the 1% or less range.  The white frame in the top right may be part of a vision tracking system now shown to be a receiver to light an LED, he notes the white squares are reflective material used to locate and track the board for power delivery, and the top left board looks to be an Intel MAX10 FPGA which can do beamforming calculations (when each element has to be driven to steer in a particular direction). As far as I can see, there are no custom parts in that box, most of it is Commercial Off The Shelf (COTS). Maybe there's a large transmitter somewhere, like we've seen before, at 45 by 45cm or 60 by 60cm, but even with that, I'm really not wowed by it.

Interestingly, in the bottom right, there are Murata-like transducers that are not Muratas. I wonder if those are actually in-house built devices. Zooming in, they look to be an active cantilever or prestressed beam (a uni/bimorph) with a circular cone on the front, which if you stripped the can off a Murata, is roughly what you'd see inside (but a disk instead of a large cantilever). I was even tempted to say that's what they were, but a few differences, and that they're in a sealed container marked "Made in China", make me think these are the actual uBeam devices. If this is the case, then uBeam's proprietary transducers are essentially a variation on what Murata have been selling for over a decade, and in my opinion unlikely to have significantly different performance characteristics, but at a higher price point. The active area is shockingly low on this array, I'd be surprised if 50% of the surface was active. More worryingly, both the Muratas and this 'custom' array have a large center-to-center pitch, more than a wavelength at the frequencies uBeam have publicly claimed, which would lead to what are called 'grating lobes' in any transmitted power - those are beams in addition to the ones you actually want, sending power out in additional directions. Great for safety...

Interestingly, during the last fundraising for uBeam over a year ago, their pitch deck became public, and some of it was shown on the EEV Blog. 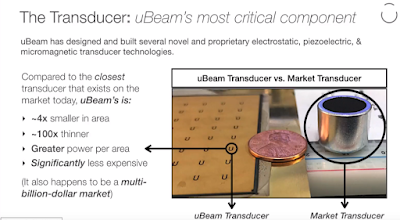 This slide makes it clear that uBeam, at the time of their pitch in late 2017, were claiming to have transducers that were smaller, thinner, more powerful, and much cheaper than the "market transducer". Except a year later they're doing a demo with a "market transducer". That's pretty embarrassing for what they themselves describe as "uBeam's most critical component".

And how does this match with charging "Internet of Things" electronics? Does each need a board that's 14 by 8cm? Or do they each get a Murata sized can transducer that essentially takes up a 1 cm cube, and receives 1/100th of power of those boards?

What of the potential partners and customers from that pitch?

Were any of those multi-billion dollar companies there to say that yes, indeed they would be partnering with uBeam? Or a year later are each and every one of them unconvinced? 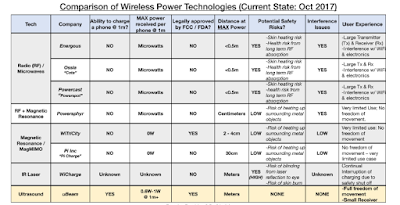 And what of their claims, back in Oct 2017, that they could charge a phone at 1 meter at up to a Watt, already approved by the FCC and FDA, with no safety or interference risks, and a small receiver?

So in summary, uBeam showed (at least from this picture) nothing new, and in fact looks to be steps back from what was claimed already complete in 2017 during fundraising, but now have a competent CEO that's been at the heart of a similar company who raised hundreds of millions on not much more than uBeam appear to have, and likely has a big financial incentive to get it sold. 2019 might be more interesting than I thought.