I'm often asked "What is Acoustic Nonlinearity?" (No, really, it's actually surprisingly common. Bet you're jealous.)  Seeing as I have the smartest readers, both of them, I thought I'd do a basic explanation of it here. For something really detailed, I'd suggest these lecture notes, a book like "Nonlinear Acoustics" by Beyer, or "Diagnostic Ultrasound Imaging: Inside Out" by Szabo - I'll be borrowing some images from each of those in this post.

Nonlinearity means "not linear". Obviously. We tend to simplify things and think of them as linear - everything scales together. I kick a ball twice as hard, it travels twice as far - that's linear. I work 40 hours a week I get my salary, I work 80 hours a week and I still get the same salary - that's nonlinear. And stupid. The image below shows how this happens in real physical systems.

Every physical system is nonlinear, but we can often just simplify things and pretend they are linear, right up until they aren't. Once you have to include nonlinearities, things get really complex, really fast. Some smart people spend their lives working on this type of thing. With sound this can happen in a number of ways, some beneficial, and some not.

With acoustic nonlinearity, what happens is this: An acoustic wave travels through a medium - this can be through human tissue for a medical scan, or through air for a sound. You can keep increasing the amplitude of this wave, and as you double the amplitude the wave gets twice the size. At some point, there's enough energy in this wave that at the top half of the cycle it actually compresses (squeezes together) the medium, and at the bottom half it's a rarefaction (pulls it apart). The propagating medium gets denser at the top half, and less dense at the bottom.

Once this starts to become significant, the density change actually starts to effect the velocity of the acoustic wave - the denser part goes faster, the less dense part slower - and so the wave starts to 'tilt' and one half catches up with the other. That's what you can see happening in the top parts of the image below. 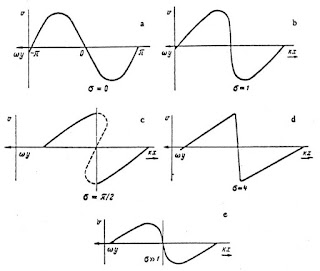 Once the top part of the wave catches up with the bottom part, the middle row of the image, then you get a 'saw tooth' wave. What is happening is that energy that is at the fundamental driving frequency starts moving higher in frequency - for example in a medical ultrasound image if you send out at 1 MHz and nonlinearity happens, you create signal that's 2MHz, 3 MHz etc by 'sucking away' some of the energy at 1 MHz.

If you've had a medical ultrasound scan in the last 15 years you've probably benefited from this. You can use acoustic nonlinearity to get a much better resolution in your scan with that 2 MHz component without some of the difficulties of building a system to transmit at that higher frequency.

The downside to pushing all this energy higher in frequency is that if you need to use it at the lower frequency, well it's gone from there, and more critically the attenuation is almost always higher at higher frequencies. Attenuation is where you lose some of the energy of the acoustic wave over distance, so basically higher frequency waves die off faster. The bottom line of the image above shows the saw tooth wave getting smoothed out by attenuation.

Szabo, Chapter 12, has some more great images.This shows how the wave changes as it travels out, and the graphs on the left show the shift of energy away from the fundamental frequency to the higher harmonics. 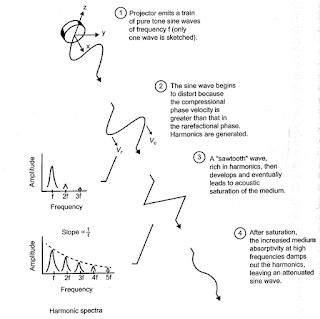 How far can a wave go before this occurs? Well, there are some basic equations that can tell you when it does. If you don't like maths, I've put all of that at the bottom and I'll cut to the interesting example right away. For those of you who really like maths, see below, then check out the lecture notes linked to above, or go to Chapter 3 of Beyer's book.

TL;DR. Nonlinear distance gets shorter with:

Let's pick a couple of examples and test them. I'm going to take some acoustic numbers from here. Two cases, 45 kHz and 145 dB, and 75 kHz and 155 dB. (dB is a logarithmic way of referring to sound pressure, in this case that's about 500 Pa and 1600 Pa respectively).

Wow that's a short distance (it's actually slightly longer than that in reality due to attenuation, but not much). And it doesn't tend to happen slowly - it ramps really quickly and within around 1.6 times that distance (48 and 8cm respectively), huge amounts of the energy are moved to higher frequencies.

Then the increased attenuation in air removes that acoustic energy entirely, converting it to heat. To give you an idea of the degree of nonlinearity, if you look at the energy available at 1 meter at the fundamental frequency with 155 dB vs 145 dB, then you've driven 10 times harder, but you only get about half as much again (around 95% of the additional energy is lost as heat). Not very efficient.

This is what's known as saturation - when you keep driving harder and harder, but you just can't get any more energy in. The medium (in this case air) is saturated and can't really absorb any more, most of what you add is lost. There are some basic equations to work this saturation pressure out, one is listed on page 510 of Szabo, it's detailed below. For air, at 45 kHz, at 1 meter, it's about 450 Pa, or 144 dB. Past that value of pressure, at that frequency, you're just running faster and faster to stand still, and getting very hot in the process.

So there you have it, a basic explanation of nonlinear acoustics. Here's a summary:

The Acoustic Impedance of Air is 410 Rayls, and the Sound Velocity in Air is 343 m/s.

Posted by StartupPR at 9:23 PM